The NDC support project is set under the umbrella of the IKI funded Sino-German Cooperation on Climate Change (SGCCC) and in the context of China's climate commitments under the Paris Agreement, including the mid-century, long-term low greenhouse gas emission development strategy (LT-LEDS) and China's subsequent NDC, as well as China’s 14th Five Year Plan. It is led by the GIZ and will be executed in close collaboration with the National Center for Climate Change Strategy and International Cooperation (NCSC) in China and Climate Analytics.

The project seeks to support the implementation of existing and development of new, ambitious measures and opportunities to drive climate ambition in China. Concretely, the project will support the national government as well as the governments in selected provinces through analysis, sharing of lessons learned and capacity building. A focus lies on the power and industry sectors and forging cooperation opportunities between Chinese and German/ EU players. The project is structured along the following main lines of activities:

The EU cement sector has made progress to reduce emissions in the past three decades, yet there is a long way ahead for the carbon... 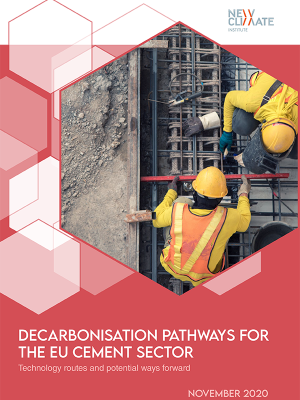