Global climate change governance has changed substantially in the last decade, with a shift in focus from negotiating globally agreed greenhouse gas (GHG) reduction targets to nationally determined contributions, as enshrined in the 2015 Paris Agreement. This paper analyses trends in adoption of national climate legislation and strategies, GHG targets, and renewable and energy efficiency targets in almost all UNFCCC Parties, focusing on the period from 2007 to 2017. The uniqueness and added value of this paper reside in its broad sweep of countries, the more than decade-long coverage and the use of objective metrics rather than normative judgements. Key results show that national climate legislation and strategies witnessed a strong increase in the first half of the assessed decade, likely due to the political lead up to the Copenhagen Climate Conference in 2009, but have somewhat stagnated in recent years, currently covering 69% of global GHG emissions (almost 50% of countries). In comparison, the coverage of GHG targets increased considerably in the run up to adoption of the Paris Agreement and 93% of global GHG emissions are currently covered by such targets. Renewable energy targets saw a steady spread, with 79% of the global GHG emissions covered in 2017 compared to 45% in 2007, with a steep increase in developing countries.

Our new study published by Climate Policy finds that national climate action has spread rapidly, and that this spread is strongly... 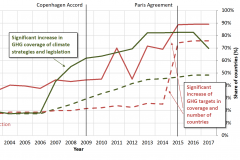