The Climate Opportunity report investigates the economic, social and environmental benefits for climate change mitigation action in cities. Enhanced policies and measures for residential building retrofits, bus networks and district-scale renewable energy can generate millions of jobs, save billions of dollars for households, and prevent hundreds of thousands of deaths related to ambient air pollution worldwide. The analysis is based on the development of new methodologies, which provide local and national policymakers with a blueprint for how cities and nations can evaluate these impacts and benefits to develop their own robust cases for climate change mitigation policies. 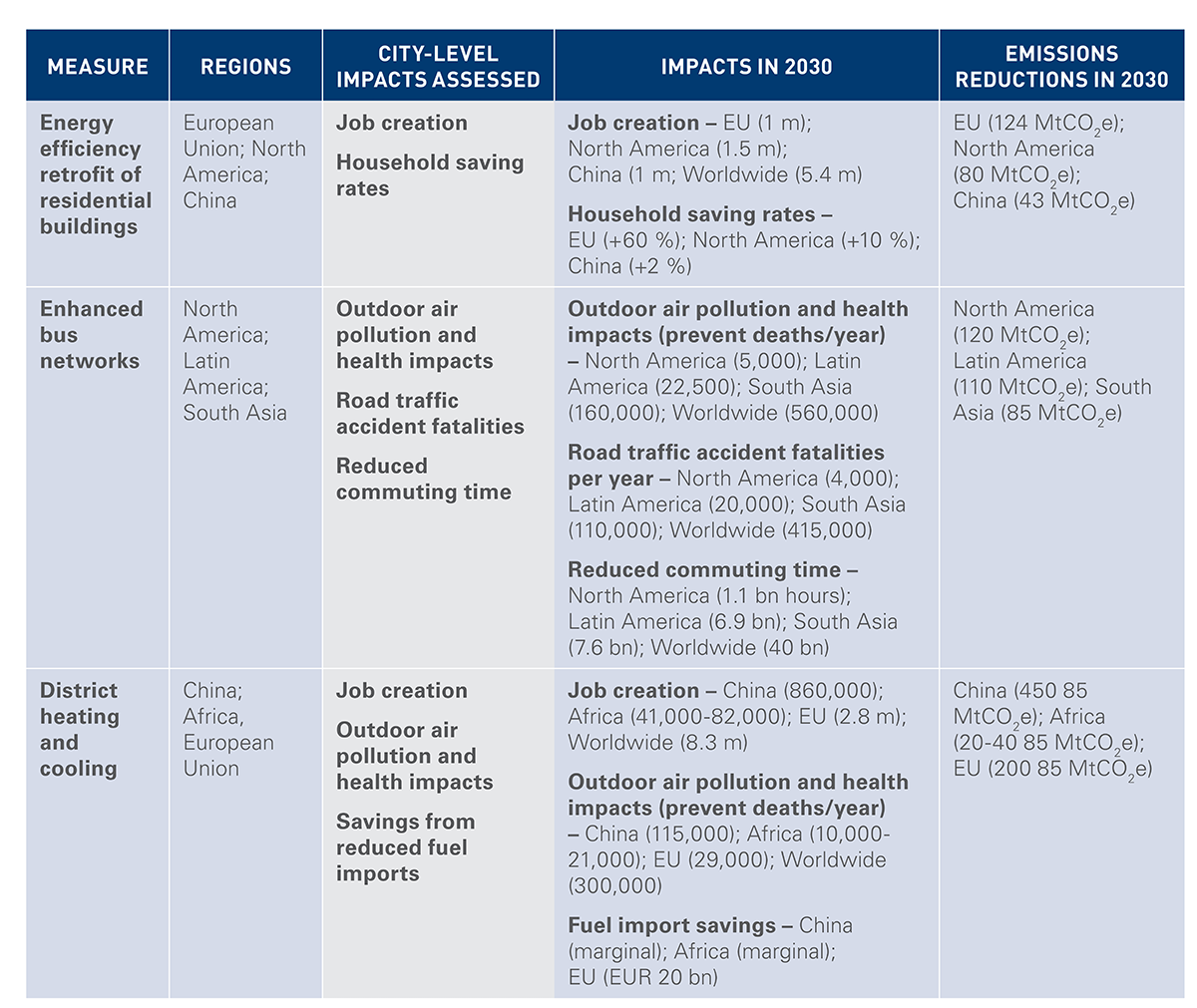 Cities account for 73 % of global GHG emissions (IEA 2016); if nations should be able to deliver on their commitments under the Paris Climate Agreement, it is necessary to encourage and facilitate large-scale urban climate action. Achieving substantial reductions in energy-related emissions requires simultaneous climate action across sectors. Detailed, practical, and scientifically robust information exists on what type of climate actions urban areas can and must take to reduce their emissions. The aim of the Climate Opportunity report is to help local and national policymakers to establish the case for action by providing evidence on how climate policies are interrelated with, and deliver outcomes for, health, wealth and other development agendas. The Climate Opportunity report outlines the benefits for three highly effective climate actions and provides local and national policymakers with a guiding methodology for how cities and nations can evaluate these impacts and develop their own robust cases for climate action policies.

The Climate Opportunity report looks at the wider impacts of climate change, up to 2030, by analysing how efforts to promote energy efficiency retrofits in residential buildings, enhanced bus networks, and district-scale renewable energy reduce emissions as well as affect health and prosperity in selected global regions. These measures, impacts and regions were selected based on insights from recent research that highlights the most relevant, high impact and achievable climate actions (ARUP & C40 Cities 2016; McKinsey & C40 2017). These actions are crucial to the delivery of the Paris Agreement. 2030 was identified as a reasonable timeframe for impacts to be captured, though immediate action from incumbent Mayors is still required in order to deliver the rate of necessary change to achieve these impacts in 2030. The report’s analysis focuses on two scenarios. First, a reference scenario that projects urban developments based on current trends and, second, an enhanced action scenario that assumes that each climate action is implemented at a level consistent with the requirements of the Paris Agreement. The Climate Opportunity report has found positive impacts for various regions and countries in different stages of economic development. The report also shows that climate action can have proportionally greater benefits for lower income groups in the cities of developing countries, where populations often have the most to gain from the introduction of new technologies and practices. Table 1 demonstrates the effects of taking urban climate action, in line with the enhanced action scenario. Climate action can be action for health and prosperity, with hundreds of thousands of prevented deaths, millions of jobs created, and billions generated in household savings.

Climate Opportunity provides an evidence base that shows how acting to prevent climate change also helps cities to achieve multiple policy goals and deliver outcomes for health and prosperity.

Local governance is enabled and constrained by decisions, laws and institutions at a regional, national and international level of government (Broekhoff et al. 2018). Therefore, it is often necessary for city governments to coordinate a wide range of actors to fulfil their goals. National governments can, for example, control taxes, subsidies and regulatory frameworks that have a significant environmental impact or that, occasionally, hold back innovative policymaking at the urban level. The Climate Opportunity report’s impact assessment framework can help local policymakers, and other actors, to better understand the full socio-economic impact of taking ambitious climate action in line with the Paris Agreement. Thereby, the report’s findings can aid urban areas in making a robust case for why climate action is about more than just climate and how the impacts of undertaking ambitious Paris Agreement-compliant measures will benefit many actors.

Cities around the world are taking responsibility for their climate impact through ambitious action, as evidenced by the growing number of voluntary commitments cities are making through the Global Covenant of Mayors for Climate & Energy; along with the yearly progress that is being reported. To enable local policymakers to take the climate action that is necessary for meeting national commitments under the Paris Agreement, national governments should formulate plans for how they can support their cities in adopting ambitious climate measures – while delivering on health and prosperity. There are many policies that can facilitate urban climate action in the form of regulations, fiscal measures, informationprovision as well as governance reforms that strengthen the role of local decision-making (Broekhoff et al. 2018). National policy can also have a key role in fostering coordination across sectors and levels of government. As the Climate Opportunity report shows, acting to prevent climate change is interrelated with, and delivers outcomes for, health, prosperity and wider development agendas. Helping a broad set of stakeholders see the benefits, as well as guide them on how to work together to realise positive impacts, should be both a local and a national priority.

The research funded by Bloomberg Philanthropies and the Global Covenant of Mayors (GCOM), developed by NewClimate Institute, C40, and... 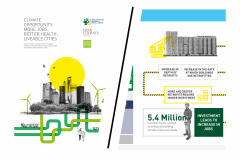 The Opportunity 2030 dashboard provides an interface to interactively compare scenarios for different benefits and regions assessed in... 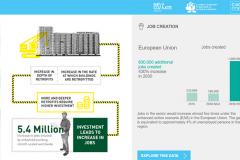