This blog post is based on the findings of the project Analysing the aggregate impact of global non-state and subnational climate action, and is a joint output in collaboration with PBL Netherlands Environmental Assessment Agency and Data-Driven Envirolab.

Car manufacturers have responded to recent national government policies and market signals by setting ambitious targets for electric vehicle (EV) sales, which has resulted in higher estimated EV shares in some countries than could be expected from government policy alone. However, more ambition is needed from both governments and manufacturers to stay on track to reach net-zero emissions by 2050. Other actor groups such as cities and retail companies could also be more heavily involved in the interaction with national governments to accelerate the necessary transformation in the passenger cars sector.

The ambition loop between governments and businesses 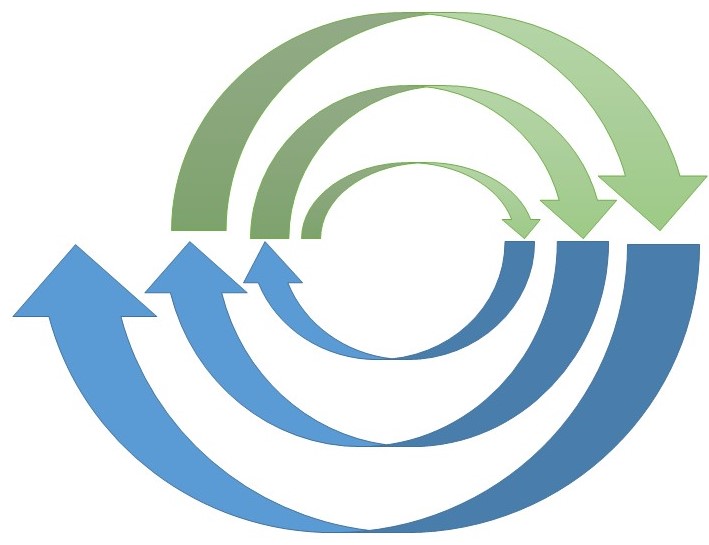 In the runup to COP26 in Glasgow, countries are requested to ratchet up their Nationally Determined Contributions (NDCs) to secure the goal of reaching global net-zero emissions by 2050 in line with the Paris Agreement. This first NDC update cycle marks an important milestone in global climate negotiations, as the transformation to net-zero emissions requires rapid and concerted efforts now. Against the backdrop of the call for urgency from the latest IPCC AR6 report, governments need to set ambitious climate change mitigation targets and implement ambitious domestic policies and measures accordingly.

To achieve the transformation to net-zero emissions, governments, companies and other actors must work together and push each other to reach higher climate ambition by establishing a positive feedback loop – or ‘ambition loop’ (Figure 1). The ‘ambition loop’ facilitates ambitious private sector action by providing a level playing-field consisting of ambitious targets and policies, backed by a predictable regulatory environment and clear timelines. At the same time, governments are keener to strengthen targets and policies if they know business leaders are already taking action.

Evidence of an ambition loop between governments and car manufacturers

The change currently underway in the automotive sector illustrates the first steps of an ambition loop. This ambition loop towards transformative changes is especially important because emissions from passenger road transport worldwide totalled 3.6 Gt CO2 in 2018, a figure that keeps rising every year. Rapidly decarbonising passenger cars (but also freight trucks) is therefore of crucial importance on a global pathway to net zero emissions by 2050. The IEA suggest that EVs should represent 75% of new car sales by in advanced economies and the Climate Action Tracker’s Paris Agreement Compatible Sectoral Benchmark suggests at least 95%.

The first policies in support of electric mobility were put in place in the 1990s, but these did not gain much traction. In the last decade, however, policymakers around the globe have put forward more ambitious policies to incentivise a low-carbon transition in the transport sector. In addition, an increasing number of car manufacturers across the globe are setting EV sales targets in the past few years. We map key developments in the transformation towards electric mobility in Figure 2. National governments in the European Union (EU), the United States of America (USA), and China have started to introduce EV policies around 2010. 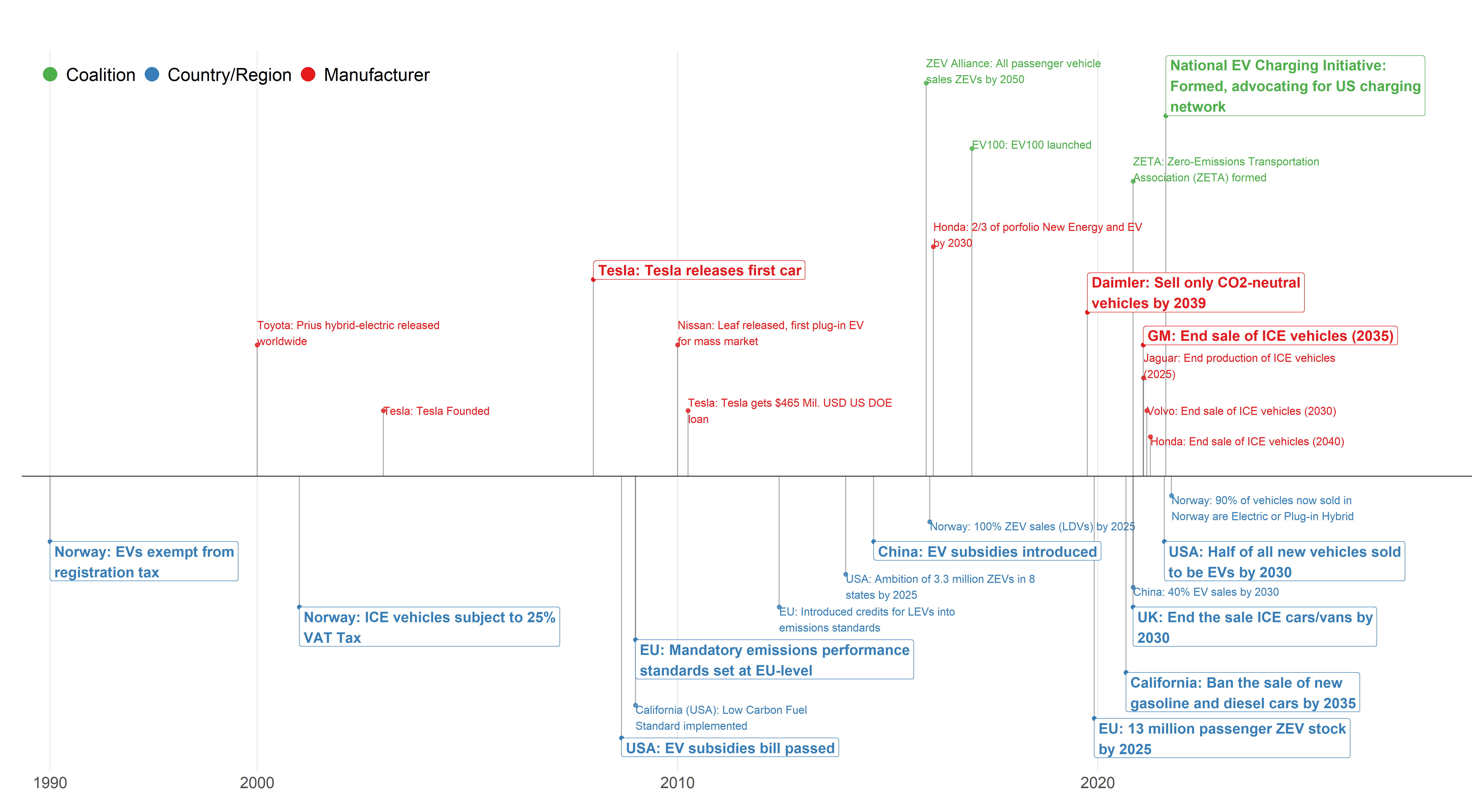 Car manufacturers are stepping up to the challenge of decarbonising road transport.

Cities, regions and other businesses are also pledging to the deployment of electric mobility.

In some countries, car manufacturers have already overtaken governments’ EV sales targets. This is a sign that the ambition loop between governments and companies is in motion. This conclusion is supported by the 2021 report ‘Global climate action from cities, regions and businesses’ (Figure 3) that analysed the impact of EV sales targets from car manufacturers on greenhouse gas emissions in the EU27+UK, the USA and China. We compared these EV sales targets with domestic policy targets. If car manufacturers fulfil the EV sales targets outlined in their sustainability reports, national EV shares in the EU27+UK, USA and China would exceed EV shares that can be expected from current government policies (Figure 4). This will, however, only result in substantial greenhouse gas emissions reduction if the renewable capacity in the electricity system increases in a parallel effort. 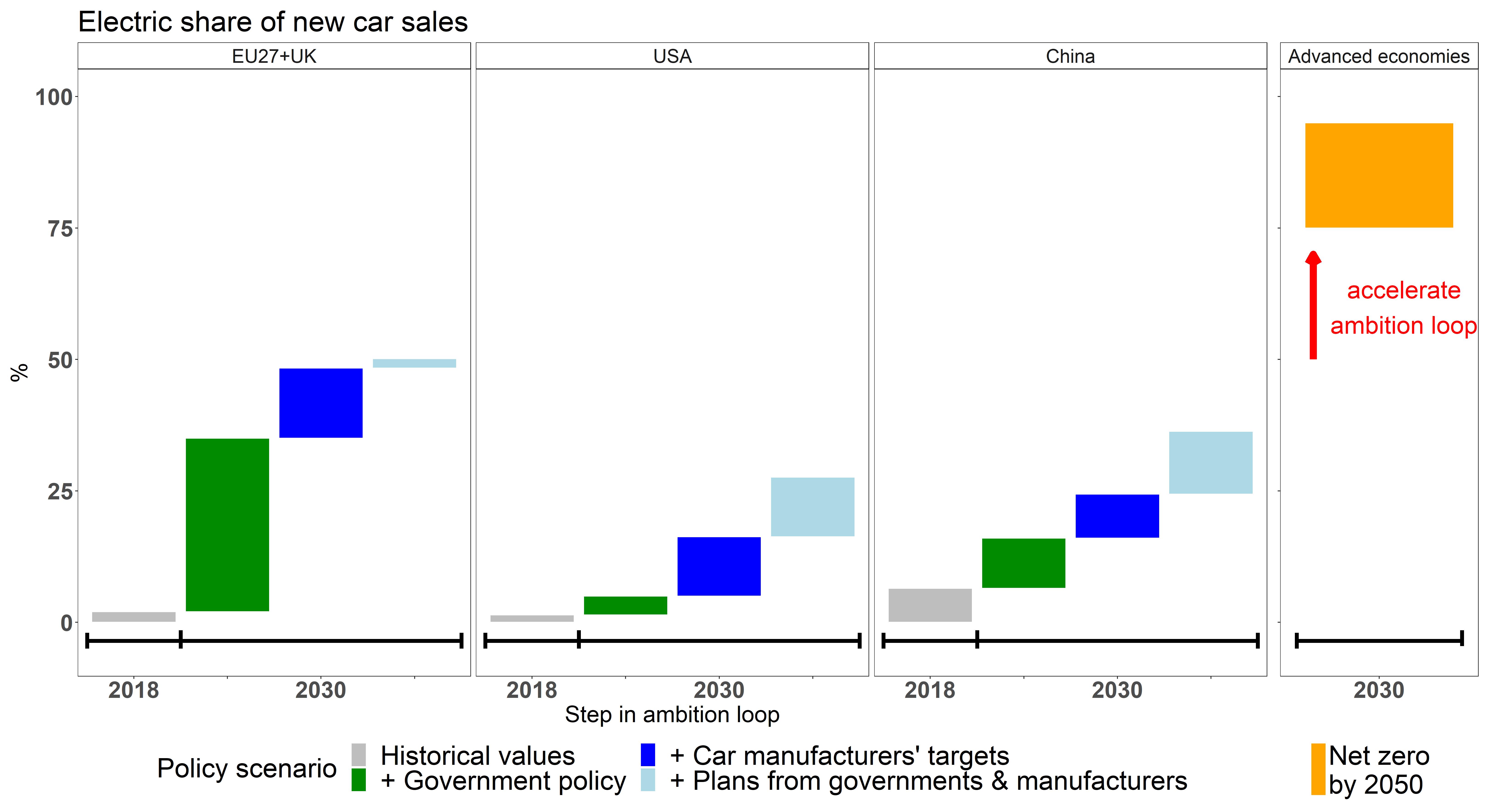 Figure 4: The ‘ambition loop’, in terms of steps between historical 2018 EV sales shares and projected EV sales shares by 2030 as a result of government policy (green), car manufacturer' targets beyond these policies (blue) and additional announced actions from governments and car manufacturers if implemented (light blue). This is compared to the required share by 2030 for advanced economies in a 2050 net-zero emissions scenario based on the IEA net-zero scenario and Climate Action Tracker Paris Agreement Compatible Transport Benchmark (orange).

Governments are currently considering increasing the ambition of targets related to EV uptake. The EU has brought forward the Fit-for-55 climate plan that includes the ambition to step up CO2 performance standards to reduce 55% emissions from cars by 2030, which is expected to increase market uptake of EVs1. In addition, President Biden announced the Build Back Better Agenda that, among others, aims to achieve a 50% share of (hybrid-/fuel cell) electric cars of all new vehicles sold1 by 2030. China is mandating car manufacturers to achieve a 40% electric share in car sales by 2030.

Meanwhile, car manufacturers are still raising their ambition. For example, ’, Daimler AG by 20391, and Volkswagen announced to increase their ambition level for EV sales in Europe to 70% and in China and the US to 50% by 20301. These additional pledges are, however, not yet anchored in plans or strategies such as sustainability reports.

The ambition loop between governments and car manufacturers demonstrated first sparks of transformative action in some countries. However, it is not sufficient to keep the world on track on a net-zero emissions pathway, yet (see Figure 4).

More actors, such as cities and retail companies, are encouraged to join and strengthen the ambition loop. Cities can promote EVs by providing charging infrastructure or discounts for EV parking permits. Retail companies could commit to electric vehicles procurement, for example by joining the EV100 initiative, WBCSD Mobility Decarbonization project or ITF Decarbonising Transport Initiative.

The ambition loop to electrify road transport is in motion but needs to be accelerated and enlarged for a deep and timely transformation to zero emissions.

1Not included in Figure 4