Shipping provides a critical service behind the scenes moving goods from A to B in an increasingly connected and globalised world. However, most of us never see the ship that brought us the produce we buy in the grocery store, the T-shirt we bought on sale, or think about how the components of our new TV are part of a large logistics chain uniting the world. Compared to the number of people flying around the world, very few have crossed an ocean on a ship. And while shipping is one of the most energy and emissions efficient ways of moving things around, it still is a major contributor to climate change: the sector is estimated to account for approximately 816 million tonnes CO2eq in 2012; 2.1% of global greenhouse gas (GHG) emissions. This is comparable to annual emissions of large economies like Japan or Germany. Without further action, shipping emissions are expected to grow by 50-250% between 2012 and 2050.

According to the IPCC, to achieve the temperature goals of the Paris Agreement, global emissions – including shipping – must peak as soon as possible and decline rapidly, reaching net-zero by around 2050. Last year, the IMO came out with an Initial IMO Strategy on Reduction of GHG Emissions from Ships that included the ambition “to peak GHG emissions from international shipping as soon as possible and to reduce the total annual GHG emissions by at least 50% by 2050 compared to 2008 whilst pursuing efforts towards phasing them out […] on a pathway of CO2 emissions reduction consistent with the Paris Agreement temperature goals”.  A carbon price has the potential to play an important role in helping to steer the international shipping sector towards this goal. In a recent NewClimate study we assessed different carbon pricing options for the maritime sector and found that a levy is likely the most effective option in reducing GHG emissions, while also minimising administrative burden, and complying with the principles of No More Favourable Treatment (NMFT) and Common But Differentiated Responsibilities and Respective Capabilities (CBDR-RC). Here are eight steps to guide the implementation of a levy for international shipping:

1. Revise the existing MRV regulation to increase transparency and include per route emissions

In order to implement a levy on emissions, it is necessary to first know how much is being emitted and exactly who is responsible for the emissions on each route. There are currently two data collection systems for international shipping: the EU MRV system and the IMO Data Collection System (IMO DCS). The EU MRV applies to all ships weighing at or above 5,000 GT sailing to and from EU ports and the data collected is publicly available. The IMO DCS also applies to ships weighing at or above 5,000 GT and has a global coverage, but individual ship data remains confidential. However, to assess a levy for shipping, the MRV system would need to be both global in scope and publicly available per ship and route, so neither the EU MRV nor the IMO DCS suffices in their current form. To maximise the effectiveness of a levy, ship charterers should be able to look up the efficiency including the historical emissions of a ship. This information is also important in order to check if a shipping company has complied with its obligations under a levy.

An equally important question is who should be responsible for paying the levy. In theory this could be done “upstream” at the point of fuel suppliers, or “downstream” at the point of the shipping company, which could be defined as “the shipowner or any other organisation or person such as the manager or the bareboat charterer, which has assumed the responsibility for the operation of the ship from the shipowner.” As enforcement of a levy may be difficult upstream, using this definition of shipping company for the compliance entity places the compliance obligation with the entity that is most able to make decisions about reducing emissions.

3. Make the levy payable either directly to the IMO or integrate levy payment procedures into port fee structures

The administrative burden of any new levy should be kept to a minimum. A designated payment matched to emission reporting and verification could be paid directly to the IMO or integrated into the berthing fee structure that shipping companies already pay to port authorities. Approximately 28 of the 100 world’s largest ports already apply environmentally differentiated port fees. In such an approach, more efficient ships or ships willing to reduce speed in their approach pay a reduce docking fee. Such adjusted fees could be expanded to include the levy price.

4. Build competences to check compliance and enforce the levy as part of port state control measures

Article 218 of UNCLOS provides port states with the right to take actions against vessels that violate international rules and standards, if the vessel is voluntarily in the port of that state. In addition, several Memoranda of Understanding have been signed reinforcing the role of port states in enforcing safety and environmental regulations. Combined with MRV data, a port could check that a shipping company is up to date with its levy payment obligations as it currently does with bunker delivery notes. Compliance would apply to emissions from the vessel since the last time the vessel entered a participating port. This would incentivise a ship charterer to verify that levy obligations have been paid for previous voyages undertaken by other charterers.

5. Set the levy level to provide a clear and steady incentive for action

The levy should be set high enough to ensure an incentive to take emission reducing operational measures in the short term and make zero carbon technologies increasingly competitive in the medium term. The price level at which a levy would be effective partially depends on cost differences between renewable options for marine fuels and prices for incumbent fossil fuels.

The price of alternatives and therefore the required carbon price to induce change depends on a number of factors. Renewable fuels, for example for hydrogen or ammonia, are tied to the cost of renewable electricity. If this cost is low, costs for e.g. hydrogen decrease too, making this fuel more attractive. For shorter distances, electric shipping is a promising option, especially because of the comparatively high amount of energy lost in conversion from electricity to hydrogen and then further into gas through methanation.

6. Set a clear upward trajectory for the levy to provide more certainty for investors

Starting with a moderate levy price level can help avoid large market distortions or a shock to world trade. The levy could then increase on an annual basis to provide certainty for investors and make the transition to zero-carbon fuels and technologies attractive such that fossil fuels are phased out by around 2050. By increasing the levy each year, the IMO is able to react on technological changes in the shipping sector. Considering that ships have a life span of several decades, the price level should ensure new fossil fuel powered ships are uncompetitive by around 2030.

7. Establish a fund to receive and disburse levy revenues

Revenues from the levy could go towards a special purpose fund, that could address the principle of CBDR-RC, compensating disproportionately affected states. Moreover, the fund could promote further R&D to improve best available technologies and operational practices and bring them into the mainstream, for example with a focus on ports in developing countries. The IMO has already set a precedent for a multilateral fund with the International Oil Pollution Funds. Another model could be the Global Maritime Technology Cooperation Centres Network (GMN) Fund as called for by Cambodia, China, Ecuador, Georgia, Iran, Jamaica, and Kenya at MEPC73.

8. Set a clear course for a decarbonised maritime future

Discussions on establishing a levy for international shipping could be introduced in a workstream within the Marine Environment Committee (MEPC) for candidate medium-term measures that specifically includes “new/innovative emission reduction mechanism(s), possibly including Market-based Measures (MBMs), to incentivize GHG emission reduction”. In order to be implemented from 2023, the process to propose, lay the groundwork and implement the levy must start now. 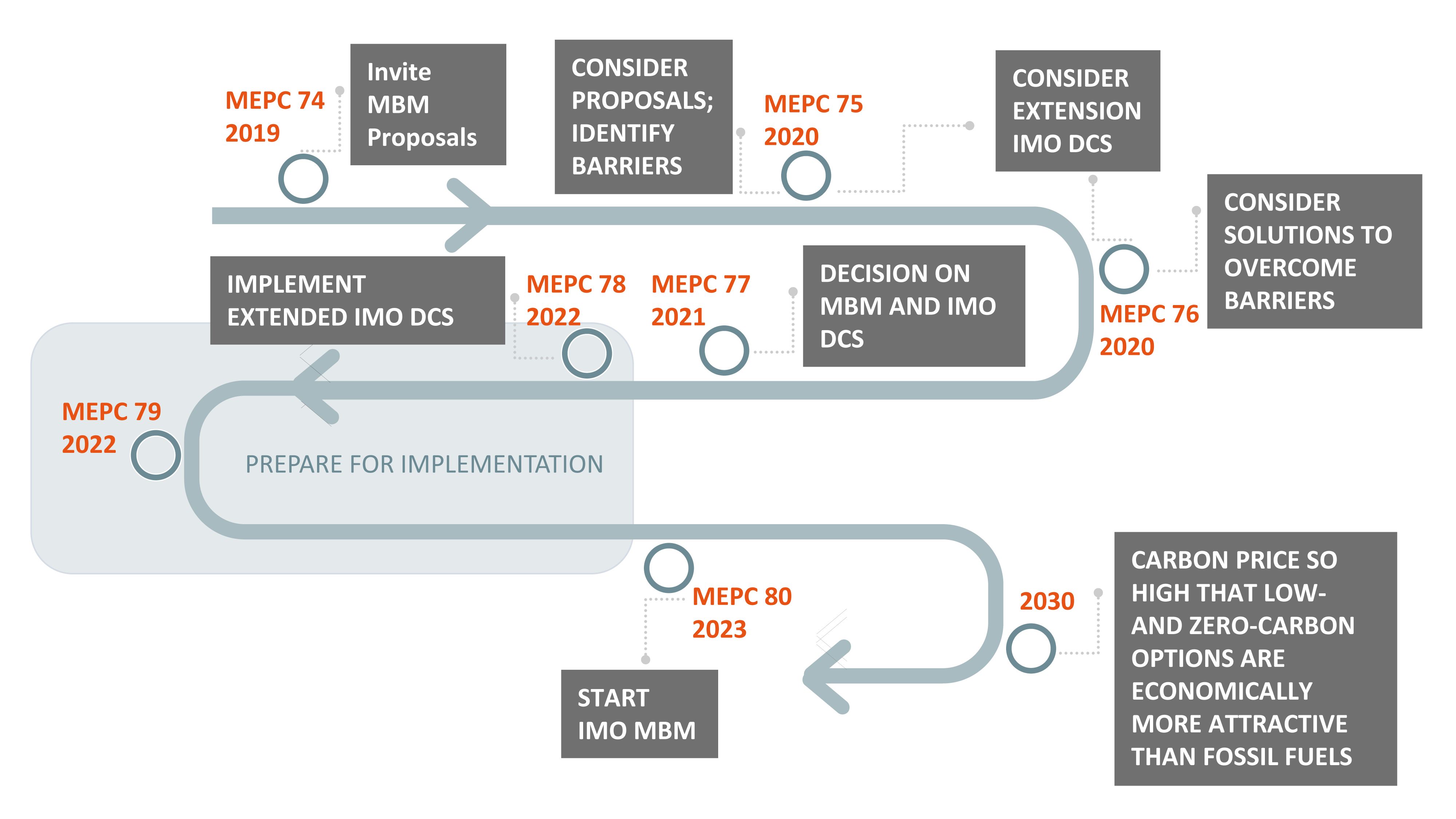