The CAT has updated its effort-sharing assessment to incorporate the latest science and emission trends, which has changed the ratings for some countries.

“We created these new categories because we wanted to be able to show more accurately whether government climate commitments are adequate to meet the Paris Agreement’s 1.5°C warming limit and provide a baseline for evaluating their actions,” said Bill Hare of Climate Analytics.

“In our previous rating system, the vast majority of the 33 countries we rate fell into just two categories: ‘medium’ and ‘inadequate,’ which made it difficult for people to judge a government’s relative and absolute performance.”

He noted after seven years of use it was evident that the ‘medium’ rating did not clearly convey that such a climate commitment would require everyone else to take considerably more action to keep warming below 2°C, let alone limit it to 1.5°C as required under the Paris Agreement. This category has been re-named ‘insufficient.’

“Equally, there were so many countries rated ‘inadequate,’ covering such a wide range of global temperature increases, that we divided this into two categories: ‘highly insufficient,’ and ‘critically insufficient,’ so it is now much clearer who is doing the least, and what the consequences might be if action is not improved.”

The new ratings make it instantly visible—with a better graduation scale—which governmental climate actions are the best and which are the poorest: the CAT now rates countries like the US, Russia, Turkey and Saudi Arabia as ‘critically insufficient’ and rates Japan and South Africa ‘highly insufficient’.

If all governments put forward targets in the 2°C compatible range, warming could be held below 2°C but not well below 2°C and hence would still be too high to be consistent with the Paris Agreement 1.5°C temperature limit.

The majority of changes in country ratings are not due to that country improving its climate action in absolute or relative terms, but because of revised emissions data and the CAT adding new and more recent effort-sharing studies that resulted in a larger fair share range. 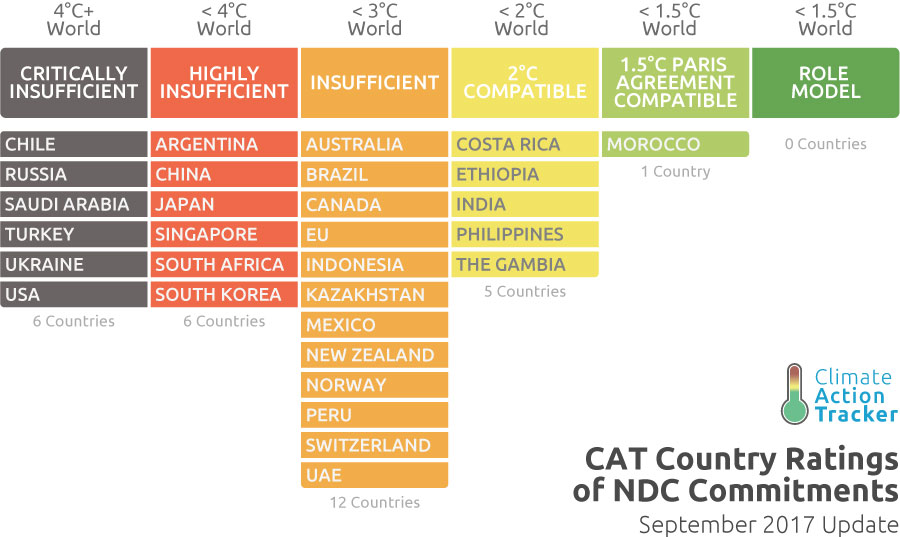 The CAT category for each country rates the government’s commitment under the Paris Agreement, submitted in their Nationally Determined Contribution (NDC). Unfortunately, the CAT assessments of governments’ implementation actions show that these are often weaker than their NDCs.

The changes in the rating of the climate commitments of Australia and New Zealand cannot be seen as them having actually improved, with both countries continuing to fall behind on climate action implementation.

Similarly, India’s climate commitment has received a higher rating, because the new studies included by CAT allow for a higher emissions level for India, not because India has changed its target.

The change in the rating of China’s climate commitment from ‘medium’ in the old rating system, to ‘highly insufficient’ in the new system reflects some significant underlying developments.

China’s annual emissions, cumulative emissions, and its GDP and Human Development Index have increased over recent years with the consequence that many effort-sharing assessments now give China a larger relative responsibility and capability to reduce its emissions than in our earlier assessments.

“The new commitment ratings now also make it very transparent what the warming levels would be if all countries took the same level of action of the country being rated. We have 12 countries in our list of 33 whose inaction would see the world reach over 3°C of warming—there is much more work to do here,” said Hanna Fekete from NewClimate Institute.

In addition to rating countries on their climate commitments, the CAT also provides a rating of each country’s climate action implementation based on a detailed analysis of the policies and regulations designed to achieve their targets that a country has put in place.

In China, for example, climate action implementation is ahead of its NDC.

“On renewable energy deployment in China is running far ahead of it national plans. China’s 2020 goals for PV deployment were almost doubled recently, after the initial targets were achieved nearly four years ahead of schedule. These and other factors are likely to have a positive effect on reducing China’s emissions and reinforce the likelihood that China’s CO2 emissions may have already peaked, “said Yvonne Deng of Ecofys, a Navigant company.

“We also see positive developments in India with the recent goals for electric vehicles, continuing acceleration of renewables and cancellation of coal plants pointing to improvements.”