In this project, NewClimate analysed the Netherland’ government’s proposed target pathway of reducing GHG emissions to 55% below 1990 by 2030, and further towards climate neutrality in 2050.

The specific focus of the analysis was to find out, whether or not this target pathway is a fair contribution to the global efforts to mitigate climate change and limit warming to 1.5°C.

The Paris Agreement foresees developed countries to lead the efforts in climate change mitigation, based on the principle of common but differentiated responsibilities and capabilities. We find that the proposed target pathway does not live up to the Netherlands’ fair contribution.

Under an unambiguously fair trajectory, the Netherlands have already used up their budget.

In practice, this means that the Netherlands need to decrease their emissions as fast and deep as possible, and additionally provide substantial support to other countries.

This project was financed by Greenpeace Netherlands, Natuur & Milieu and Milieudefensie.

Find out more
What is a fair emissions budget for the Netherlands?
Publication date 29 Aug 2022

The Paris Agreement foresees developed countries to lead the efforts in climate change mitigation, based on the principle of common but... 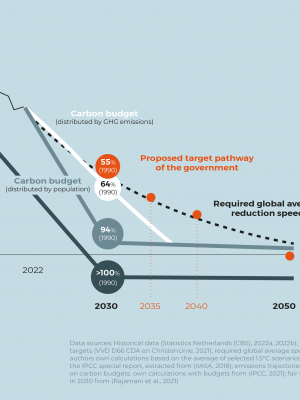 Hanna Fekete and Niklas Höhne (NewClimate) presented new research on the Netherlands’ government’s proposed target pathway and why it... 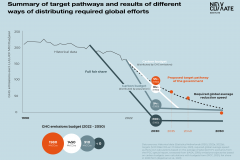