As part of the Paris Agreement, countries are mandated to update and enhance their Nationally Determined Contributions (NDCs) every five years—increasing their ambition with every cycle. The first round of NDCs were submitted starting in 2015 and countries have submitted or are finalising their updates for the new cycle in 2020/2021. The purpose of this project was to develop a method to systematically assess the design of NDCs and to apply it to 20 NDCs. While there are several tools that analyse NDCs, they are comprehensive, concise, replicable and comparable to a varying degree. Our method aims to fill a gap by addressing those criteria and providing new insights into the design of NDCs. We evaluate the NDCs along key elements that are critical for the success of the NDC ambition cycle: 1. Increased mitigation ambition; 2. Comprehensiveness; 3. Implementation plan; and 4. Transparency. We have applied this method to 20 NDCs with the aim to include a diversity of geographic contexts as well as NDCs with different emphasis, target types, and approaches to climate change mitigation.

The analysis shows that the selected countries fare generally well on comprehensiveness and transparency in their new NDCs. The rules under the Paris Agreement on what to include in the NDC and how to describe it show a positive effect; most countries provide the information necessary according to the rules. However, the elements that are critical for the success of the ambition cycle, i.e. raising ambition in each round and having a plan to implement the targets, are only partially covered by many countries. Of the analysed NDCs, less than half showed higher mitigation ambition compared to their first NDC. Many targets remained unchanged or were found to be less ambitious due to changes in parameters such as baseline emissions. Many countries lack a clear implementation plan for the targets: In many cases measures have not yet been included in national legislation, but preparations are underway especially for those countries that increased their targets. Currently, governments can make their NDCs “look good” by fulfilling all requirements on comprehensiveness and transparency, but only a deeper analysis reveals that their NDCS are not more ambitious or lack an implementation plan. To uncover such deficiencies and to make the ambition cycle of the Paris Agreement a success, a careful checking of NDCs is necessary.

As part of the Paris Agreement, countries are mandated to update and enhance their Nationally Determined Contributions (NDCs) every... 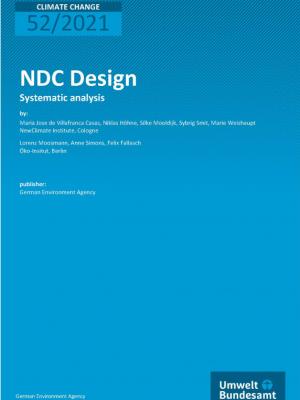