The project, in collaboration with Agora Energiewende and local research partners, looked at the impact of de-risking measures on the financing cost of renewable energy investments in two countries in South Eastern Europe (SEE), Greece and Serbia. The study was undertaken against the backdrop of current budget discussions at the EU level to include provisions for a renewable energy guarantee mechanism in high cost-of-capital countries.

To date, most South East European countries have relied heavily on conventional power generation technologies. However, over the next decade, countries in the region will have to replace around 50 per cent of their existing capacity for age-related reasons. Various factors argue in favour of making renewables the centrepiece of future energy investment in SEE, including recent dramatic declines in the cost of wind and solar PV, the need to rapidly reduce global greenhouse gas emissions, and the vast renewable energy potential of the region. However, renewable energy development in SEE has been limited to date. One impediment to scaling up renewables is their higher up-front capital intensity compared to investment in coal or natural gas.

The research explored how various political and financial measures could help to “de-risk” renewables investments. It estimates how such measures would impact the prices paid by consumers for renewable energy, taking onshore wind investment in Serbia and Greece as case examples. The estimations of the quantitative effects that result from de-risking measures rely on data derived from interviews with private-sector investors and project developers, based on a methodology developed by UNDP (De-risking Renewable Energy Investment, DREI).

The analysis shows that using such de-risking measures would yield considerable reductions in the financing costs for onshore wind projects in Greece and in Serbia. Furthermore, comparable benefits would be likely to occur in other countries of South East Europe, given similar uncertainties for renewable energy investment across the region. 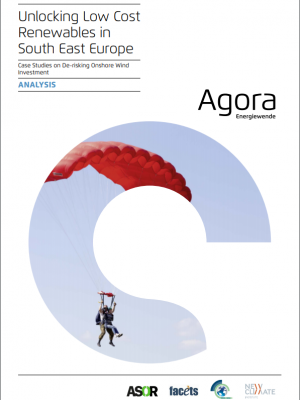