Guiding questions for the Global Stocktake under the Paris Agreement

The independent Global Stocktake (iGST) seeks to increase the accuracy, transparency, accountability, and relevance of the official Global Stocktake benchmarking process by bringing together independent researchers and advocates. In this paper, build on previous work, we aim to identify knowledge gaps as well as potential areas of focus for a successful GST to take place.

The Paris Agreement includes a cycle of ambition. Each five years, starting in 2023, a Global Stocktake (GST) analyses the global situation and provides information for countries to prepare updated Nationally Determined Contributions (NDCs). The Paris Agreement itself is very vague on what the GST should cover. It only notes that it should “take stock of the implementation of this Agreement to assess the collective progress towards achieving the purpose of this Agreement and its long-term goals. It shall do so in a comprehensive and facilitative manner, considering mitigation, adaptation and the means of implementation and support, and in the light of equity and the best available science.”

Given the crucial role of the GST in benchmarking and enhancing global climate action, the independent Global Stocktake (iGST) seeks to increase the accuracy, transparency, accountability, and relevance of the official benchmarking process by bringing together independent researchers and advocates. In this paper, we aim to build on previous work to identify knowledge gaps as well as potential areas of focus for a successful GST to take place.

The international climate negotiations that followed the adoption of the Paris Agreement led to asking the Subsidiary Body for Scientific and Technological Advice (SBSTA) to develop guiding questions for all components of the GST, including specific thematic and cross-cutting questions. This paper responds to that request.

We describe a systematic review of the status of knowledge on questions that are relevant for the success of the global stocktake under the Paris Agreement, drawing on the thematic scope for the GST that is provided in the Paris Agreement and the associated decision of Katowice in 2018.

We find that some questions are adequately covered by (existing) knowledge and synthesized results, for example current trends in emissions, implied temperature increase by 2100 and activities implemented by countries on mitigation, adaptation and finance.

But a majority of questions are left unanswered, creating uncertainties with regards to the successful undertaking of the global stocktake. Ill-defined points include, in particular:

On the basis of this overview, we would recommend that an independent global stocktake would concentrate on the following points:

This summary report creates a framework to evaluate if a GST is successful and formulates recommendations for the design of the GST... 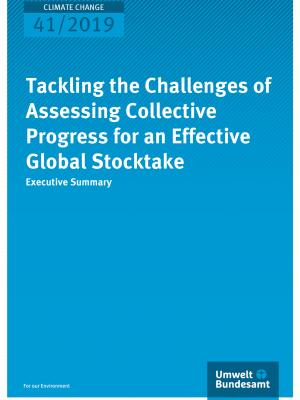