This report is the second global analysis of local and regional government and corporate climate contributions, updating “Global Climate Action from Cities, Regions, and Companies” launched at the 2018 Global Climate Action Summit. The 2018 report established the strong potential of subnational and non-state actors to help avoid climate change. This year, we aim to inform the September 2019 UN Climate Action Summit on how mitigation by cities, regions and companies could help national governments boost their ambition beyond their current targets, to come in line with the Paris Agreement’s goals.

This report aggregates the climate mitigation commitments reported to some of the world’s largest voluntary pledging and reporting platforms for city, region, and company climate commitments. The analysis was conducted at a global level as well as for ten major emitting economies: Brazil, Canada, China, the European Union (EU), India, Indonesia, Japan, Mexico, South Africa and the United States (US). In addition, the report features the following new components:

The report shows that cities, regions, and business are vital for achieving national and global climate change goals. Their climate action helps countries deliver and in some cases over-achieve current national pledges under the Paris Agreement. Globally, existing initiatives by these actors, in partnership with national governments, could put the world on track to limit global warming to 2°C, if they deliver their stated goals. While not yet sufficient to stay below the 1.5°C limit, climate action by cities, regions, and business allows national governments to raise their commitments and helps keep global limits within reach. The Intergovernmental Panel on Climate Change (IPCC) 2018 special report on warming of 1.5 °C (SR1.5) emphasised the need for all actors — state, sub-national, and non-state — to strengthen climate action, and highlighted cooperation between actors as a critical mechanism for halving emissions by 2030 in order to meet the 1.5°C goal. 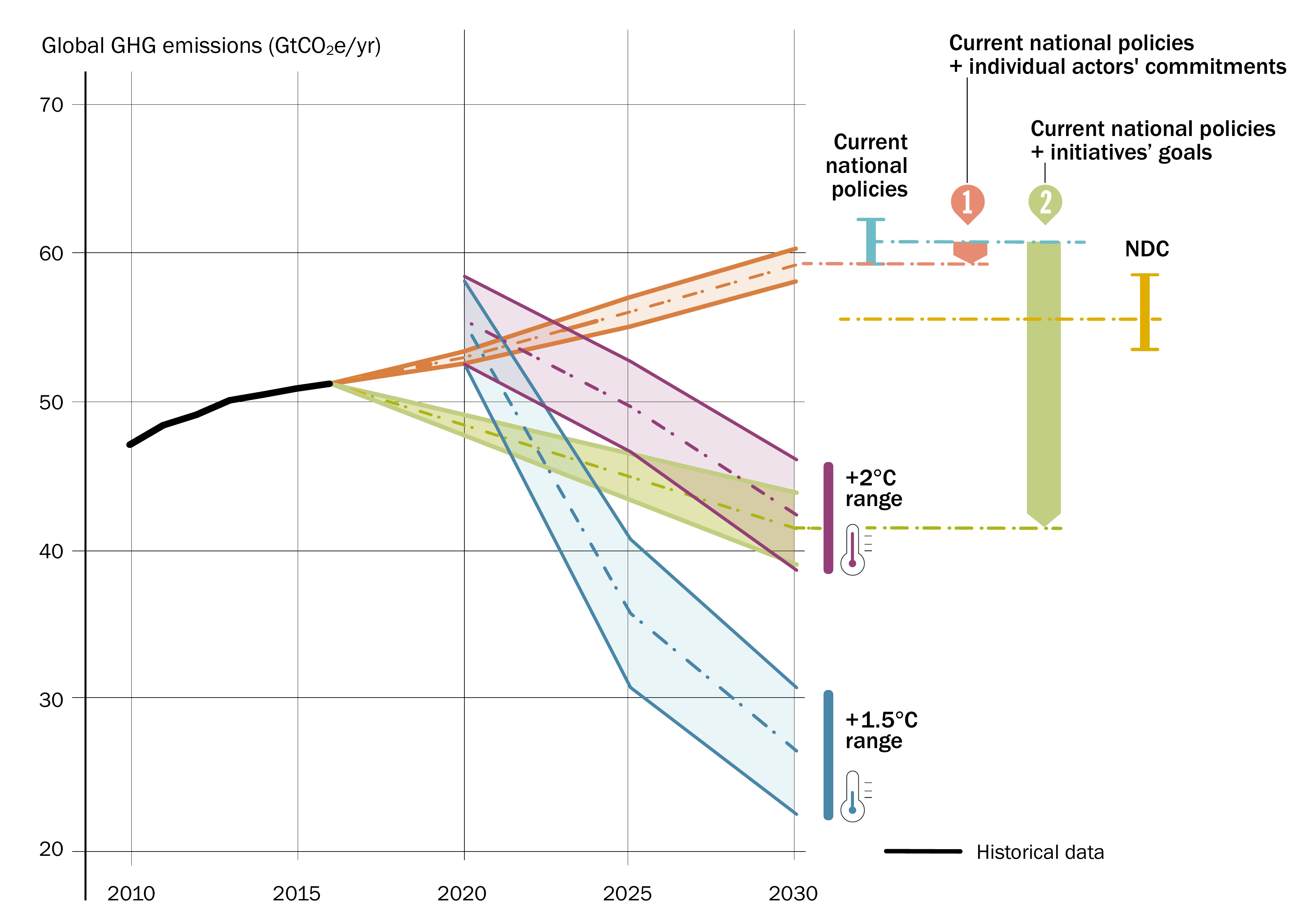 Regarding the individual actors' contributions, the report finds that global GHG emissions in 2030 would be 1.2 to 2.0 GtCO2e lower than the current national policies scenario - if the recorded and quantified commitments by individual cities, regions and companies in the ten major emitting economies are fully implemented, and if such efforts do not change the pace of action elsewhere (“Current national policies plus individual actors’ commitments” scenario). This range is roughly equivalent to Canada and Japan’s combined emissions in 2016. If nationally determined contributions (NDCs) to the Paris Agreement are fully implemented, these commitments by cities, regions, and businesses in just 10 economies could deliver additional emissions reductions of 0.4 to 0.7 GtCO2e in 2030 (“NDCs plus individual actors’ commitments” scenario). 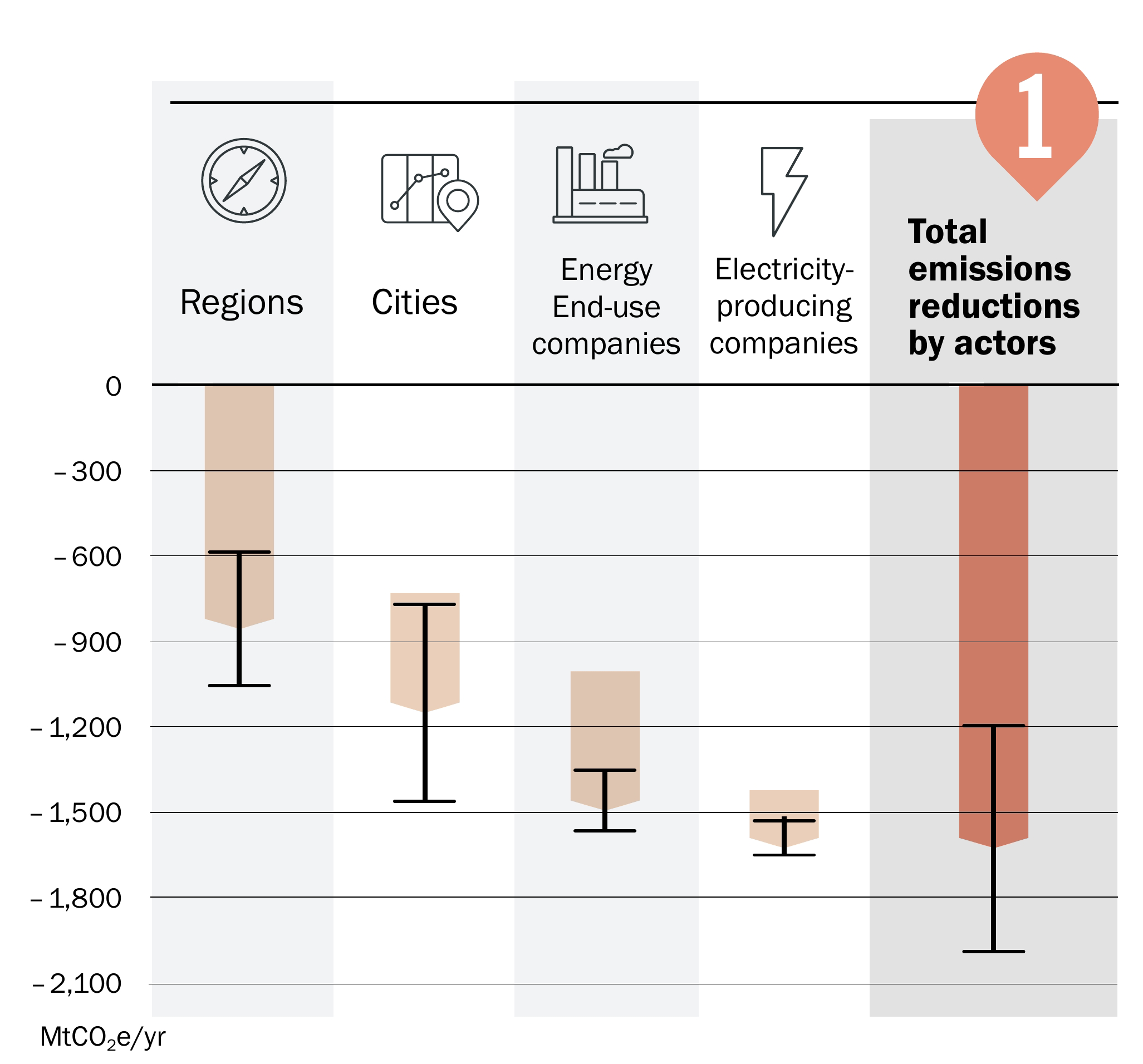 But the biggest potential impact on emissions comes from international climate initiatives. The 17 initiatives we analyse in which cities, regions, businesses, and other subnational and non-state actors work together, often partnering with governments or international organizations, have the potential to reduce global GHG emissions significantly beyond the emissions levels expected from current national policies and NDCs. Our analysis shows that ICIs (“current national policies plus initiatives goals” scenario) can reduce global emissions in 2030 by 18 to 21 GtCO2e compared to a current national policies scenario projections (60 to 63 GtCO2e/year), assuming all initiatives analysed meet their goals and efforts do not change the course of action elsewhere. If delivered, reductions by these 17 ICIs would close the global emissions gap to 2°C of warming in 2030 (in 2100, 66% chance), although a significant gap remains for reaching 1.5°C (in 2100, 66% chance). If countries also implement the unconditional NDCs submitted under the Paris Agreement (“NDCs plus initiatives’ goals” scenario, 55 to 58 GtCO2e/year in 2030), the initiatives have an additional potential aggregated impact of 15 to 18 GtCO2e/ year globally in 2030. 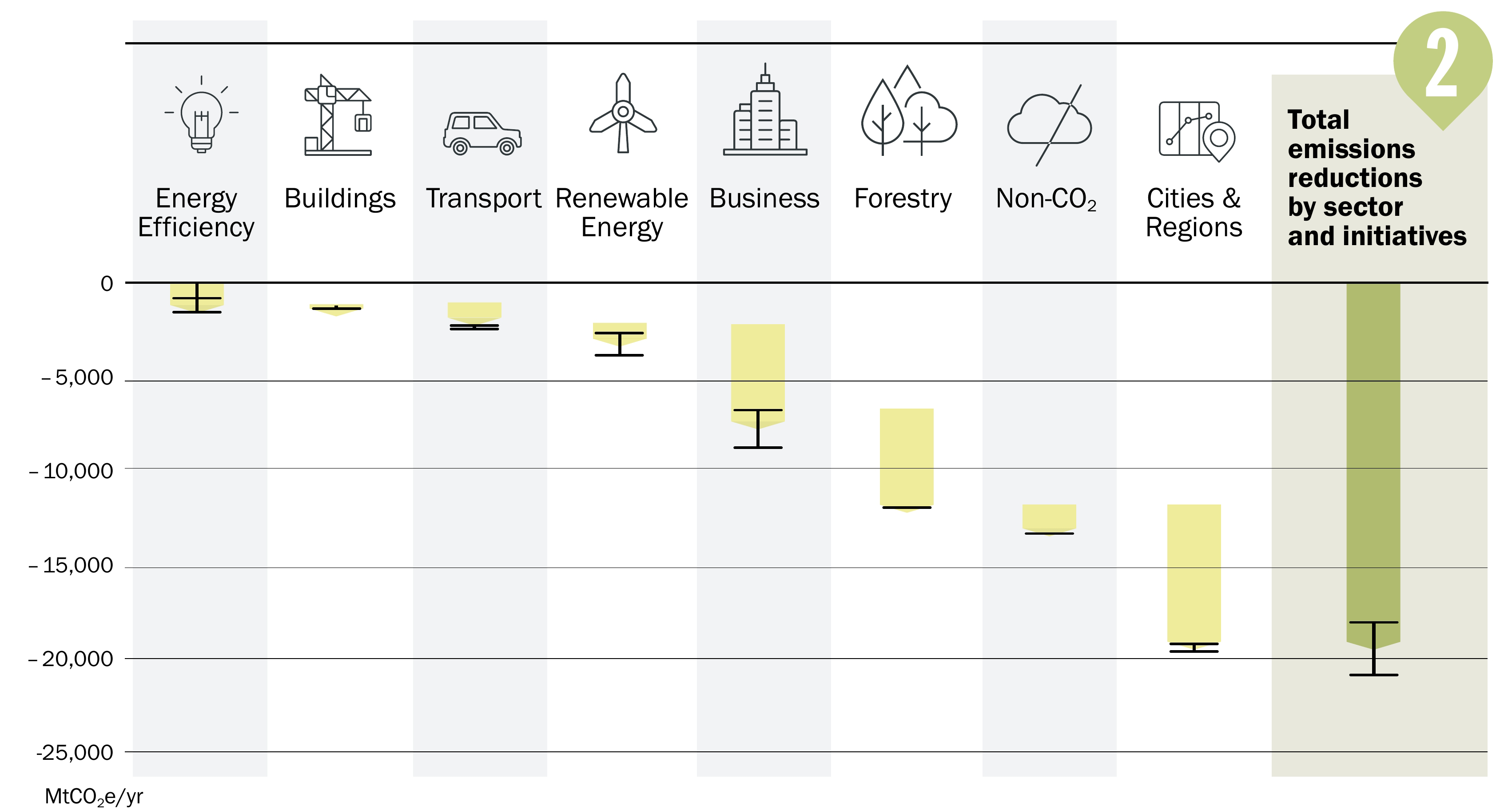 In addition to helping achieve the goals of the Paris Agreement, climate action by cities, regions and business can support the delivery of other Sustainable Development Goals (SDGs) by 2030. Given the increasing attention to synergies and potentially negative impacts between climate action and other SDGs, cities, regions and business can help ensure that global climate efforts are implemented in a way that supports, rather than hinders, local sustainable development. 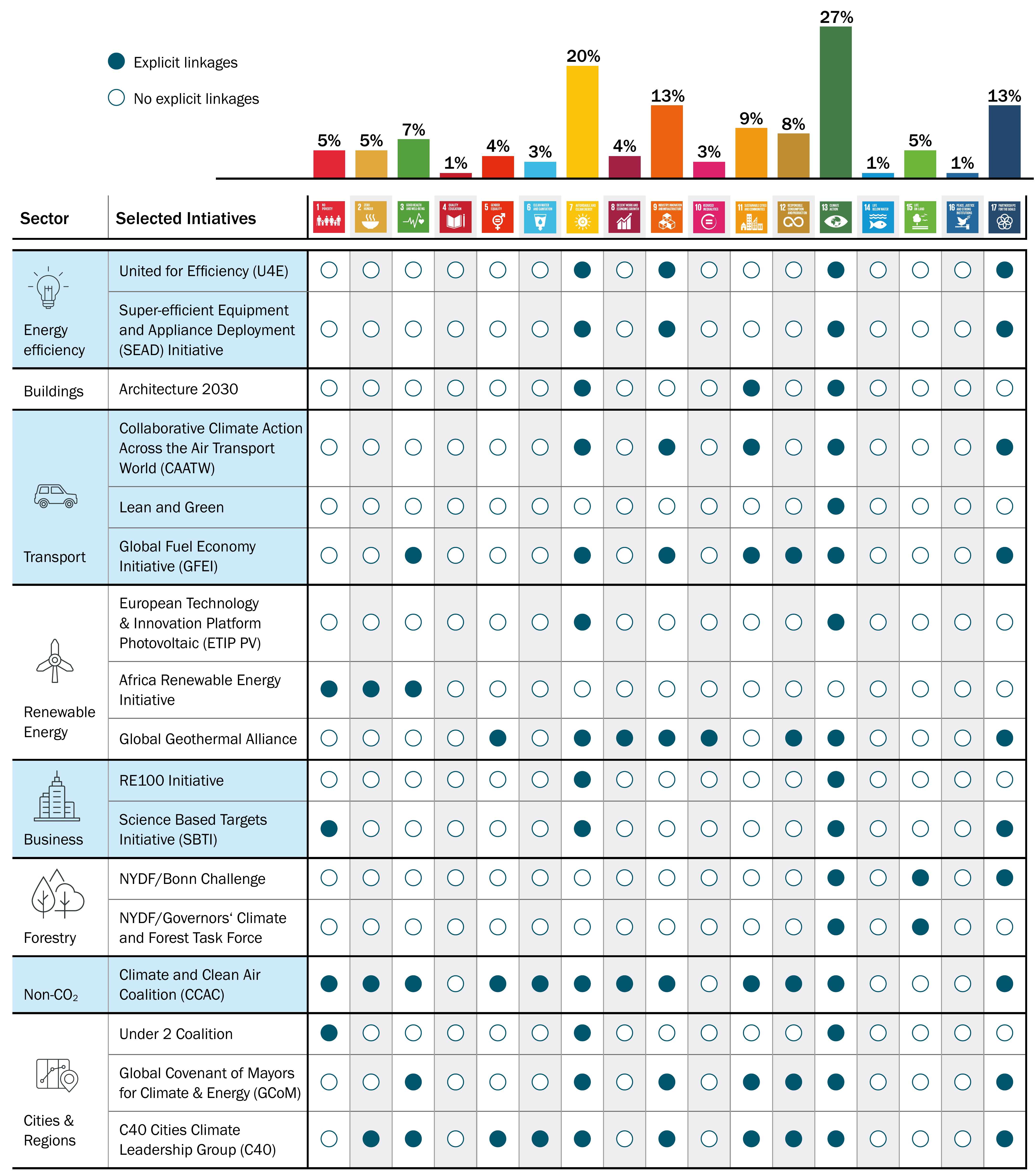 Explicit links to the SDGs for 17 international climate initiatives selected from ClimateSouth’s analysis. The numbers presented above the table represent the shares of all explicit links found. Click to enlarge.

There is more potential for positive rather than negative effects of climate action on other sustainable development goals, and vice versa. Still, subnational and non-state initiatives should pay closer attention to the potential problems in order to avoid unintended consequences. Making the possible trade-offs explicit, and devising strategies to avoid them, will be necessary to more closely align and simultaneously deliver on climate and sustainability goals. 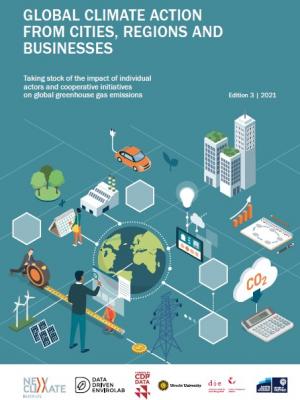 Since the Paris Climate Agreement solidified an “all hands on deck” approach to climate change, cities, regions and businesses have... 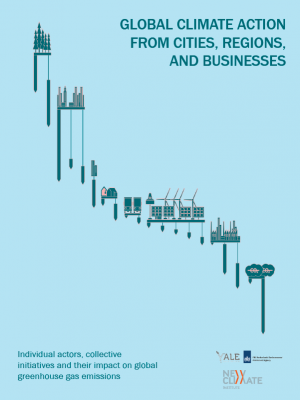