In this report, the Climate Action Tracker (CAT) explores several sets of scenarios for the evolution of the passenger vehicle stock in China, in order to inform on emission reduction and electricity demand implications.

China is currently the global leader in battery electric vehicle (BEV) sales annually, a position it has held since 2015 when it surpassed the US. The one positive policy priority in China’s COVID-19 recovery focused on transitioning the transport sector towards development of public transport systems and electrified transport. New energy vehicles (NEVs), which include battery electric vehicles (BEVs), plug-in hybrid vehicles (PHEVs), and hydrogen cars, received large boosts in the form of extended purchase subsidy schemes, investment in charging infrastructure, and lowering market entry barriers for BEV producers.

Decarbonising the transport sector is critical to China’s road to carbon neutrality as it is the country’s second largest emitting sector after industry and accounts for almost 20% of national primary energy consumption. Within the sector, China’s massive light-duty vehicle (LDV) car fleet is the primary consumer of energy and emitter of carbon dioxide (and other pollutants), and is projected to grow until 2050, where it remains the primary mode of transport. This subsector thus contains significant opportunities to help the country achieve its climate targets on the road to its long-term climate neutrality target, which currently remains out of reach. 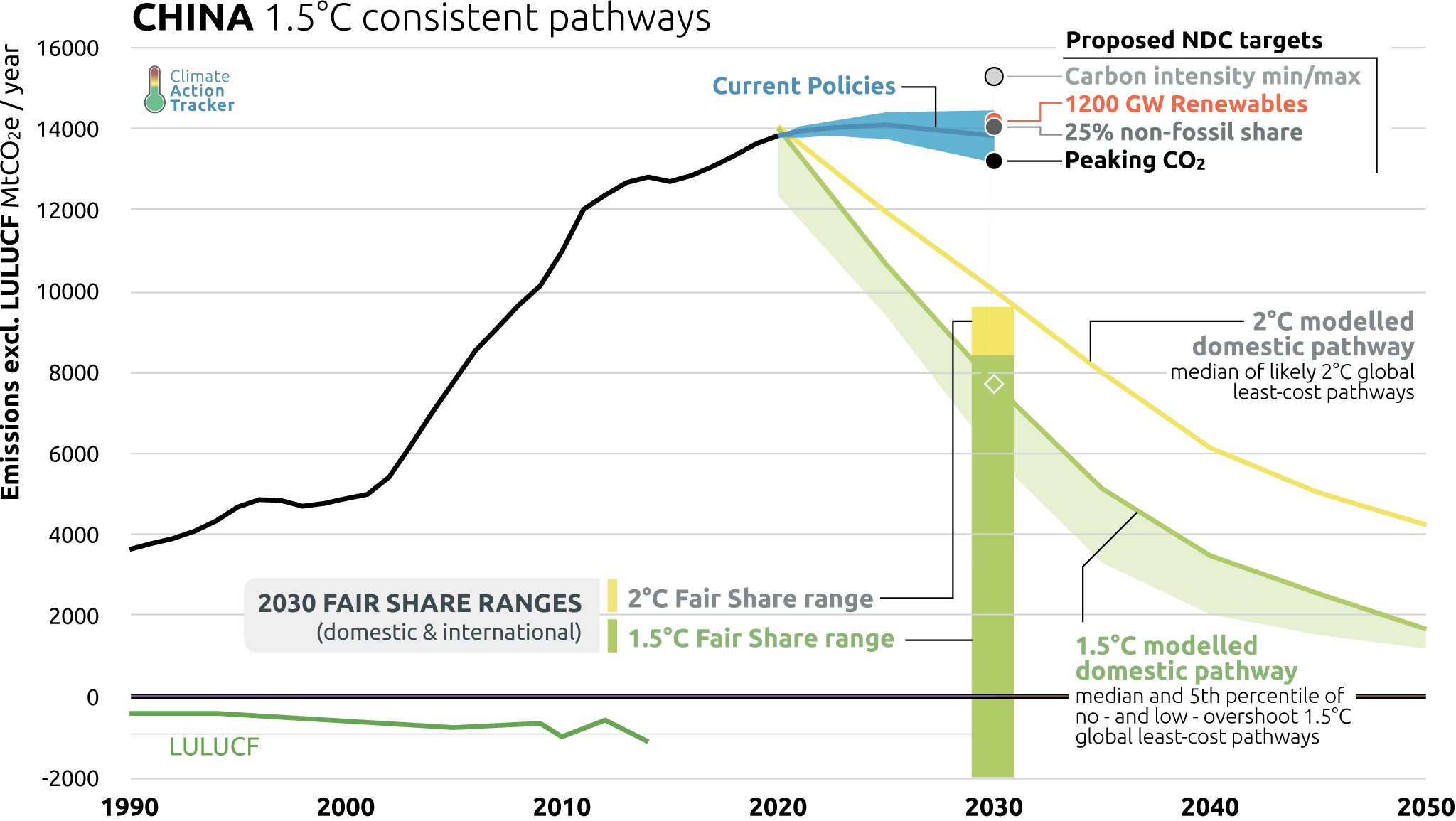 In order to inform on emission reduction and electricity demand implications, we explore several sets of scenarios for the evolution of the passenger vehicle stock in China. For each of the three scenarios — Pre-COVID-19, Current Policies, 100% BEV — we explore two sets of separate emission pathways (“Renewable Electricity” and “Fossil Electricity”), which assumes either strict decarbonisation of the power sector until 2050 or decarbonisation at current rate.

1) China’s aggressive post-COVID-19 policies to support new energy vehicle (NEV) penetration are positive, but more effort is required to make a large impact on reducing carbon emissions in the light-duty vehicles (LDV) sub-sector. Under a Current Policy scenario, all of China’s new implemented and planned policies since April 2020 have the potential to substantially reduce carbon emissions from LDV. However, LDVs emissions levels could still reach over 700 MtCO2/yr in 2050 without additional mitigation action in NEVs or in decarbonising electricity. This throws China’s carbon neutrality target into doubt.

2) Decarbonisation of the light duty vehicle (LDV) fleet will be a dedicated long-term effort in China. It is on the timescale of several decades and requires immediate action to build momentum. China’s Current Policy scenario and 100% battery energy vehicle scenarios represent some of the most ambitious NEV penetration pathways internationally. However, the emission reductions are negligible in the short term and minor in the medium. This is due to the time needed to retire the immense size of the vehicle stock and low starting share of NEVs on the road. In 2030, only a maximum of 110 MtCO2/yr of emission reductions separate the least and most ambitious scenarios; we only start to see large impacts from NEV penetration and decreasing electricity emissions close to 2040. Rapid early retirement and replacement of ICE vehicles are needed.

3) Emission reductions from ambitious electric vehicle policies in China are negligible unless coupled with a transformational shift to a low-carbon electricity sector.The future electricity demand of China’s NEV fleet will be gargantuan at approximately 1,300 to 1,600 TWh/yr in all three scenarios. Their significance is driven by the emissions intensity of the power sector. Without also decarbonising electricity production, the Current Policy and 100% BEV scenario would only reduce emissions by 9% to 13% from the Pre-COVID-19 scenario by 2050. That is compared to 88% to 100% if the power sector is decarbonised.

4) For China to achieve its long-term carbon neutrality goal by 2060, achievement of a 100% BEV vehicle stock is required, along with power sector decarbonisation. The 100% BEV & Renewable Electricity scenario, coupling full modal share from BEVs with a fully decarbonised power sector is the most ambitious scenario in this analysis. It could reduce carbon emissions from LDVs to zero, and emissions in the transport sector by 790 MtCO2/yr in 2050. Given the power sector is the most technologically mature sector ready to be decarbonised, China’s policy intentions to transform its national LDV fleet, and existing market trends, this mitigation roadmap could be an attractive and feasible target for Chinese policymaking. If this roadmap were achieved, these emission reductions from one sub-sector intervention would be equivalent to around 15% of China’s projected emissions in 2050.

Electricity demand in the pre-COVID-19, Current Policies, and 100% BEV scenario.