This article quantifies the net aggregate impact in 2030 of commitments by individual non-state and subnational actors (e.g. regions, cities and businesses, collectively referred to as ‘NSAs’) to reduce greenhouse gas (GHG) emissions. The analysis was conducted for NSAs operating within ten major emitting economies that together accounted for roughly two-thirds of global GHG emissions in 2016. Our assessment includes 79 regions (e.g. subnational states and provinces), approximately 6,000 cities, and nearly 1,600 companies with a net emissions coverage of 8.1 GtCO2e/year, or a quarter of the ten economies’ total GHG emissions in 2016. The analysis reflects a proposed methodology to aggregate commitments from different subnational (i.e. regional and city government) and non-state (i.e. business) actors, accounting for overlaps.

If individual commitments by NSAs in the ten high-emitting economies studied are fully implemented and do not change the pace of action elsewhere, projected GHG emissions in 2030 for the ten economies would be 1.2–2.0 GtCO2e/year or 3.8%–5.5% lower compared to scenario projections for current national policies (31.6–36.8 GtCO2e/year). On a country level, we find that the full implementation of these individual commitments alone could result in the European Union and Japan overachieving their nationally determined contributions (NDCs), while India could further overachieve its unconditional NDC target. In the United States, where the national government has rolled back climate policies, NSAs could become a potential driving force for climate action. 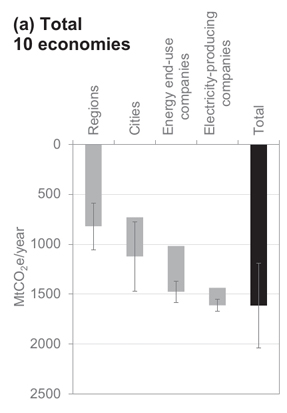