The Allianz Climate and Energy Monitor ranks G20 member states on their attractiveness as potential destinations for investment in low-carbon electricity infrastructure. It takes into account their current and future investment needs in line with a 2° C global warming trajectory.

Consistency with the Paris Agreement, negotiated by 195 countries at the end of 2015, would require a full decarbonization of the global economy before the end of the century. This transformation will be particularly challenging for the energy sector – the largest source of carbon emissions. Every existing and new power plant risks being shut down before the end of its anticipated lifetime, unless it can operate on renewable energy or find a feasible and yet unknown means for the capture and storage of carbon. Should this global climate agreement be implemented, investment patterns will need to shift rapidly to low-carbon electricity. It is estimated that energy production and use will have to be entirely emissions-free by 2055 or 2080, in order to reach the agreement’s ambitious targets of 1.5°C or 2°C, respectively (Rogelj et al., 2015). The G20 member states, representing the world’s major economies, have an important leadership and market development role to play in this transition. The first conference of G20 energy ministers in October 2015 emphasized the need for good policy practice in attracting private investment. Nevertheless, it lacked clear leadership commitment to the decarbonization of the energy sector.

The International Energy Agency (IEA) estimates that the power sector will require additional investments of USD 790 billion per year by 2020, and thereafter approximately USD 2.3 trillion per year by 2035, to advance on a trajectory which may hold the global increase in average temperature to less than 2 degrees (IEA, 2014). This projection far exceeds the USD 286 billion invested into renewable energies globally in 2015 (FS-UNEP, 2016). Investment on this level will require mobilizing substantial public and private sector investments. As renewable energy investments are fundamentally different from conventional power investments, private investors will require public guarantees and a stable investment environment before they can consider shifting funds.

The Allianz Climate and Energy Monitor indicates action areas for policy-making by ranking the G20 member states on their relative attractiveness as investment destinations for building the necessary infrastructure for low-carbon electricity. It shows how countries could improve their rating and offers insights into trends in investment needs and attractiveness, thereby identifying countries and regions that show promise for investors. 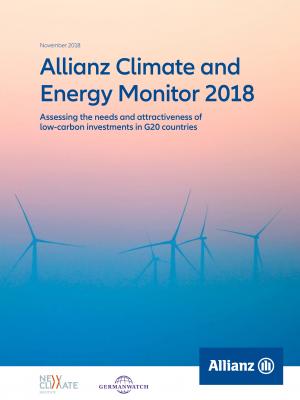 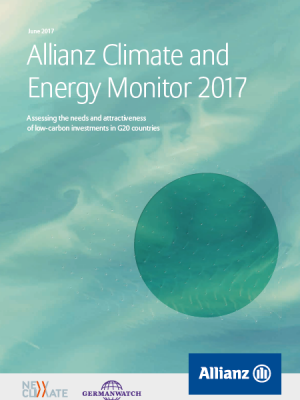 Deep Dive - What do current policy developments in China, India and the US mean for investing in renewables? (Allianz Climate and Energy Monitor)
Publication date 20 Apr 2017

The Allianz Climate & Energy Monitor Deep Dive aims to inform investors and policy-makers on the scale of investments needed in China... 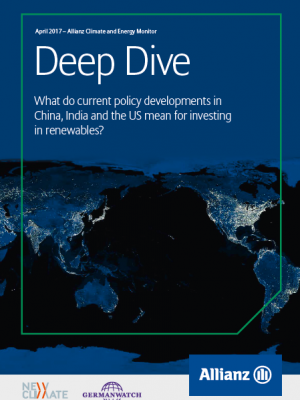 NewClimate Institute partnered with Germanwatch to develop a Climate and Energy Monitor for Allianz Climate Solutions. The monitor... 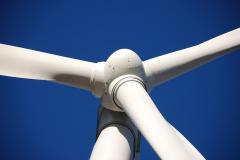