The important health benefits of preventing coal lock-in in Mongolia

Recent analysis by NewClimate Institute has estimated the direct impacts of growing coal capacity in Mongolia on human health: Operations of coal-fired power plants could cause 1,600 premature deaths / 42,000 years of life lost between 2020 and 2050. Around 70% of these negative impacts will be caused by new power plants included in coal capacity expansion plans of the Mongolian Ministry of Energy. The proposed 5.3 GW Shivee Ovoo power plant alone would cause more premature deaths and years of life lost by 2050 than all other proposed new coal plants together, while exclusively producing electricity for use in neighbouring China.

The issue with air pollution in Mongolia

In recent years, Mongolia has become known for some of the world’s worst air quality. Most of the pollution is in Ulaanbaatar, the capital city. Roughly half of the country’s population resides there and it has experienced a tripling in size in the last 30 years. According to UNICEF, overall outdoor air pollution led to roughly 3,300 premature deaths in 2016 with associated costs of MNT 18.4 billion (USD 8.5 million) in Ulaanbaatar alone. Most of the Mongolian population is exposed to ambient air concentrations of particulate matter which are well above the WHO guidelines and the National Standards of Mongolia. Recognising this issue, Mongolia has set a target to decrease air pollutants by 80% between 2017 and 2025.

Coal is one of the major causes of dirty air and GHG emissions. While most of the particulate matter comes from burning raw coal for heating and cooking, coal-fired power generation is the third-largest contributor to air pollution in Mongolia, accounting for roughly 6% of the total. Besides phasing out inefficient stoves and boilers and replacing raw coal, longer term strategies need to focus on replacing planned coal power capacity extensions with renewable energy alternatives.

Mongolia has relied mostly on coal- and oil-fired power plants in the past, and total installed coal capacity is projected to sharply increase in the upcoming years. 788 MW of the proposed new coal capacity are already under construction, but the majority of the ~7 GW of new capacity is only announced. Renewables are projected to represent 20% of total installed capacity by 2023 and 40% by 2030; however, there is high uncertainty regarding the actual construction of these planned renewable capacity additions. This is mainly due to the dependence on uncertain large hydropower projects and licensing issues. 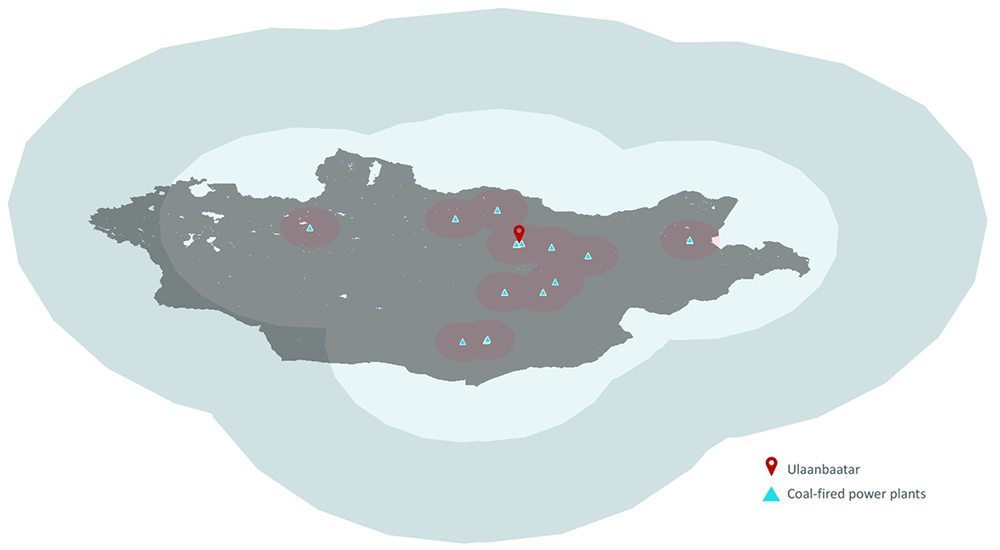 The operation of coal-fired power plants leads to the release of air pollutants that have negative impacts on human health. The pollutants considered in the analysis include primary particulate matter PM2.5 as well as sulphur dioxide and nitrogen oxides, which produce secondary particulate matter. These micro-particles can cross the lung barrier and enter the blood system, and in turn negatively impact the cardiovascular system. They can also directly cause respiratory illnesses.

Our analysis finds that a total of 1,560 people would die prematurely in Mongolia in the first half of this century due to air pollution from coal-fired power generation if current capacity expansion plans are fully implemented. This corresponds to roughly 42,000 years of life lost during the same period. Over 70% of these health impacts are caused by coal-fired power plants that are not yet in operation and could instead be replaced by cleaner energy sources. The leading cause of these potential premature deaths is heart disease (caused by a narrowing of the arteries), followed by stroke, lung cancer, and chronic obstructive pulmonary disease.

Shivee Ovoo is a planned new coal-fired power plant in Mongolia located close to the Shivee Ovoo coal mine, approximately 260 km from Ulaanbaatar. Current plans indicate a proposed installed capacity of 5.3 GW, which is almost five times the total installed coal capacity in the country in 2019. Shivee Ovoo is expected to export all its electricity over the border to the Chinese grid. Associated GHG emissions would however be accounted for in Mongolia’s future emission inventories and would put Mongolia’s commitments under the Paris Agreement at risk. At the same time air-pollution related health impacts would fall heavily on the local population. Shivee Ovoo alone would cause more premature deaths (640) and years of life lost (17,380) than all other proposed new coal plants together (470 and 12,640 respectively).

Our analysis does not cover impacts on children, the wider impact of hospital stays, non-fatal illnesses as well as lost working days, which can lead to considerable economic costs. As most of the existing and planned coal-fired power plants are located close to urban centres, health impacts could substantially increase as more people would live and work in closer proximity to the power plants if the urbanisation trend in Mongolia continues.

NewClimate Institute’s AIRPOLIM-ES (Air Pollution Impact Model for Electricity Supply) was developed under the Ambition to Action (A2A) project. It uses an accessible methodology for quantifying the health impacts of air pollution from different sources of electricity generation and other fuel combustion that can be applied in multiple countries in the form of an open source Excel tool. The first version of this tool focuses on electricity generation from coal- and gas-fired power plants. It calculates the impacts on mortality from four adulthood diseases: lung cancer, chronic obstructive pulmonary disease, ischemic heart disease and stroke, all of whose prevalence is increased with the intake of pollution. The AIRPOLIM-ES as well as methodology and guidance documents can be found here.

Commissioned by German Federal Ministry for the Environment, Nature Conservation and Nuclear Safety (BMU), the Deutsche Gesellschaft für Internationale Zusammenarbeit (GIZ) GmbH and NewClimate Institute cooperated with the Ministry of Environment and Tourism of Mongolia, the Ministry of Energy of Mongolia, and national experts to support the integration of energy and heating sector strategy with climate change planning at the national level through the Capacity Development for climate policy in the countries of South East, Eastern Europe, the South Caucasus and Central Asia, Phase III project. The project consortium provided targeted advisory support to Mongolian stakeholders to inform sectoral-level discussions and decision-making in the context of the national NDC review and revision process from 2018 to 2020. This blogpost presents main findings on the quantification of air pollution impacts from coal-fired power plants in Mongolia.