The role of international carbon markets in a decarbonising world

A growing number of countries have started to set longer-term climate targets and develop decarbonisation strategies in addition to their shorter-term commitments under the Paris Agreement. Depending on the country, offsets in the form of emission reductions or emission removals from abroad play various roles in how countries sketch out future planning. In the context of constantly ratcheted up ambition of national climate efforts under the Paris Agreement however, the role that such offsets can play requires a shift from the current practice of offsetting continued emissions trends to rapidly avoiding and reducing all emissions possible and going still further to draw carbon out of the atmosphere. In this paper, we explore the new context and discuss what it means for both potential buying and selling countries on the way to a net-zero and net-negative carbon world.

The world has collectively committed ambitious temperature limitation goals that require rapid reductions by 2030, reaching net zero around 2050, and quickly become net-negative thereafter. The Nationally Determined Contributions (NDCs) that countries have put forward toward this objective are insufficient, but a number of countries have set long-term targets and commitments some of which target net-zero emissions. Such long-term planning exercises, have the potential to serve as an important visioning exercise for a country to chart out the most ambitious decarbonisation pathway possible for all emitting sectors.

The role of offsets in such exercises requires careful consideration in the new Paris context of constantly ratcheted up efforts towards decarbonisation. 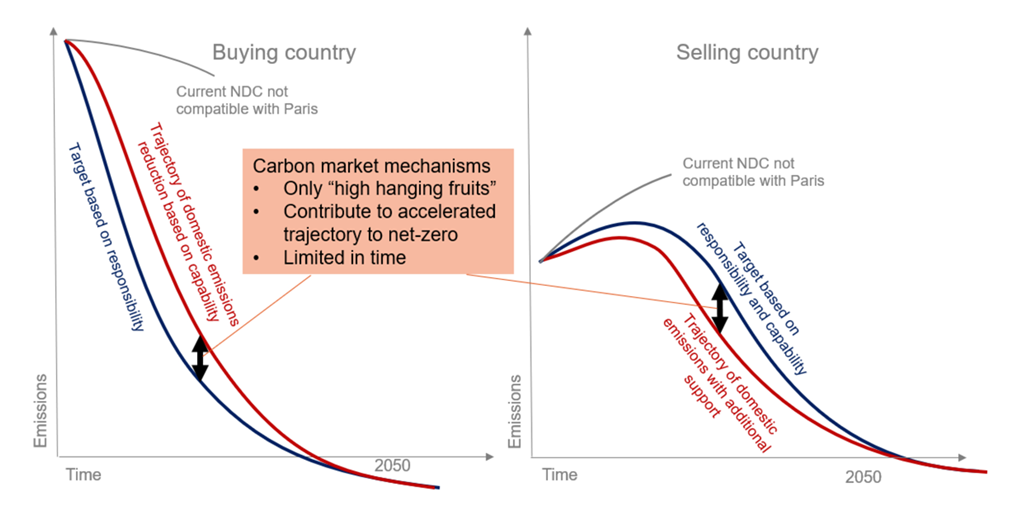 For potential transferring countries, the development of long-term strategies are important to help evaluate potential inaccessible technologies for which a country could seek international support as well as to identify the emission reductions that the country needs to fulfil their own targets and avoid overselling.

However, even this pathway may not be fast and steep enough to represent a “fair share” contribution of developed countries. Taking capacity and responsibility into consideration, any use of international offsets should come in addition to and on top of, not instead of rapid decarbonisation. Misuse of international offsets could severely undermine the ambition and meaning of a net-zero target so that in terms of domestic emissions, net-zero could be used to hide or distract from continued business as usual emissions patterns.