Kenya is one of the fastest growing economies in Sub-Saharan Africa, with high anticipated economic growth rates and ambitious flagship infrastructure projects. However, recent electricity demand forecasts were considerably decreased. Both in the scenarios of subdued growth and higher future electricity demand growth, it is key that capacity planning for electricity generation is carried out so that electricity supply matches demand. At the same time, sustainable development-related objectives and environmental targets need to be achieved. This includes Kenya’s target to reduce greenhouse gas (GHG) emissions by 30% below business as usual by 2030, as announced in the country’s Nationally Determined Contribution (NDC) to the Paris Agreement.

A major challenge for planners and policymakers in the electricity sector is identifying the optimal combination of electricity generation technologies within different load-factor categories in order to achieve the best match at the lowest cost. This study aims at supporting decision making in the electricity sector by comparing the two main power generation technologies that are considered baseload electricity supply options in Kenya, namely, geothermal and coal, and the role that they can play in Kenya’s future electricity supply mix. This role is determined by a number of factors, including technical considerations, resource availability, environmental characteristics, economics, and other issues that may act as drivers or pose barriers or risks to the development of this source. Electricity sector planning in Kenya relies on a 20-year rolling masterplan for power supply, the latest being the 2017-2037 Least Cost Power Development Plan (LCPDP), which sets a clear direction for the development of the sector and thus serves as a main reference for this study.

While Kenya has a long history of developing geothermal resources, coal has not yet been exploited. Kenya has a high geothermal resource potential of around 10,000 MW along the Kenyan Rift Valley. The current installed geothermal capacity in Kenya is 745 MW, with most of it in the Olkaria fields. However, the Government of Kenya plans to build two coal power plants over the next 30 years: one in Lamu, a 981 MW power plant divided into three units of 327 MW each, to be commissioned by 2024, and a 960 MW power plant in Kitui, which is scheduled for 2034-36. While the plant in Lamu will run on imported coal, the plant in Kitui is predicted to use domestic coal.

Generation costs: Various cost aspects must be considered when comparing the cost of geothermal and coal-based electricity generation. Geothermal power typically involves high capital expenditure due to a risky exploration and drilling phase. On the other hand, no fuel costs are incurred, and operation and maintenance costs are low and predictable. Coal power plants are less costly in the construction phase, but variable operation and maintenance costs can be significant if the coal is imported. The cost of capital for a geothermal project in Kenya is low compared to the capital costs for global coal projects. It is likely that financial support for geothermal projects will further increase and be more easily accessible in the future, while coal financing is being gradually taken out of many portfolios. Legal and regulatory costs are currently more predictable for geothermal power generation, with the Energy Act 2019 establishing a royalty scheme for geothermal resource use. For coal-based power generation, regulations are still pending and respective costs, difficult to predict. Little data exists on the decommissioning costs of geothermal plants, while for coal plants, these costs range from USD 50,000 to 160,000 per MW. Both geothermal and coal have a high capacity factor and can produce a stable output at a low price. However, the capacity of a plant can be restricted on purpose to balance supply and demand. The projected capacity factor of a plant determines the Levelised Cost of Electricity (LCOE). In the case of Kenya, in the planning period covered by the 2017-2037 LCPDP, the LCOE for geothermal is significantly lower than the one for coal (approx. USD 10 cents/kWh for geothermal vs. USD 29.5 cents/kWh for coal), since coal is expected to run at a very low capacity factor.

Affordability: The addition of more geothermal power generation capacity would have advantages over coal-based generation capacity, both in terms of limiting the overall costs of electricity supply and the retail price and ensuring cost stability. While the majority of the geothermal generation costs are fixed costs, with the cost of labour being the only significant variable factor, a substantial portion of the coal power generation costs are variable costs for fuel input. When comparing the type of capital expenditure, it is worth noting that coal power is usually characterised by very large capacity additions, causing significant spikes in capital investment costs over time, while geothermal power plants are typically much smaller and can be developed more gradually according to variations in demand. The introduction of a 981 MW coal plant in 2024 may increase the cost of electricity by up to 50% due to the surplus capacity that this large-scale capacity addition would entail for a period of at least several years. Moreover, in the case of surplus capacity, geothermal power generation is identified in the LCPDP as a higher priority option for dispatch, due to its lower marginal costs compared to coal-based power generation. Kenya’s electric utility Kenya Power will have to pay for the Lamu coal power plant’s output regardless of whether or not the power is actually purchased, due to the nature of the purchase power agreement (PPA). The PPA includes a particularly high capacity charge of USD 360 million per year, which translates to about KES 100 million per day, in a take-or-pay agreement.

Flexibility and reliability: Although geothermal and coal-fired power plants are both considered baseload power plants, geothermal plants can reach higher capacity factors, on average. Although geothermal plants operate most efficiently when running without interruption, similar to coal plants, they can also provide flexible power if contractual terms are modified accordingly. The operation and maintenance costs incurred for a geothermal plant to operate in a more flexible manner depend on the type of technology used. While operating a binary system in a flexible mode does not raise these costs significantly, the flexible operation of a flash or dry steam system may lead to a slight increase, as it involves venting steam. Increasing the flexibility of a coal plant is also technically possible; however, it has an impact on the plant’s lifetime and is similarly associated with an increase in operation and maintenance costs. The expansion of geothermal energy in Kenya provides more flexibility to planners, as geothermal power generation is decentralised, and capacity can be added gradually. Given the uncertain sector development, the implementation of a large-scale project like the Lamu plant, on the other hand, might put sector stability, affordability, and sustainability at risk.

Apart from the implications for the sector itself, careful planning in the electricity supply sector can positively contribute to the achievement of other sustainable development-related objectives that are important to society, such as employment creation, health, and climate change.

Investment in electricity generation results in the immediate creation of direct and indirect employment opportunities, as well as wider economic effects, during a project's construction and operation phases. A comparison of different generation expansion scenarios, which are based on the 2017-2037 LCPDP, reveals that i) no coal-fired power plant is required in generation expansion planning if sufficient alternative candidates are provided and expansion sequences are optimised for least-cost options; and ii) the scenario without coal, entailing more geothermal energy and natural gas, leads to more domestic employment creation and investment, while simultaneously being less expensive. A direct comparison of both generation technologies with regard to their impact on job creation shows that geothermal power generation creates three times more domestic employment per MW of new capacity than coal-based power generation. The main reason for these results are the different local shares in the value chain for these two technologies. While geothermal power has a long history in Kenya, and expertise is locally available and sourced, coal development would heavily rely on the foreign labour force, both for construction and operation and maintenance of the plant.

Electricity generation technologies also differ in terms of their impact on air pollution and human health. The energy sector in general, including both production and use, is the largest source of man-made air pollution emissions. Geothermal and coal-fired power plant emissions differ significantly, not only in terms of GHG emissions, but also other air pollutants such as particulate matter, sulphur dioxide, and nitrogen oxides. Geothermal power plants emit less than 1% of the air pollutants emitted by coal-fired power plants of equal capacity. The construction and operation of the proposed coal-fired power plants in Kenya would be a major source of air pollution in the country, with significant impacts on human health. A quantitative analysis of the health impacts shows that up to 2065, roughly 1,620 Kenyans would have died prematurely from the associated air pollution if both coal plants in Lamu and Kitui were to be built. For the same timeframe, approximately 270 premature deaths would occur if the capacity of the Lamu plant was reduced to 450 MW in total. These health impacts are further associated with significant costs for the healthcare system.

Apart from these important effects on sustainable development, the plans to develop coal-based power generation in Kenya put the country’s climate target at risk and create pressure for other sectors to invest in mitigation measures that are often more expensive and difficult to implement. While both geothermal and coal-based power generation result in GHG emissions, the average global estimate for geothermal power production, at 122 gCO2/kWh, is much lower than the estimate for coal—670-870 gCO2/kWh. In the case of Kenya, emissions calculations for different generation expansion scenarios show that by 2037, almost 3 MtCO2 could be saved annually if coal were replaced with low-carbon alternatives such as geothermal, complemented by generic backup units. Under the application of a shadow carbon price, the emissions savings could translate to cost savings of USD 160-320 million per year by 2037, depending on the price level.

Based on the study’s findings, the following aspects can guide the future development of the geothermal sector:

The scoping study aims to support Kenya Power’s Decarbonise the Energy Mix Initiative that is included in the company’s Strategic Plan... 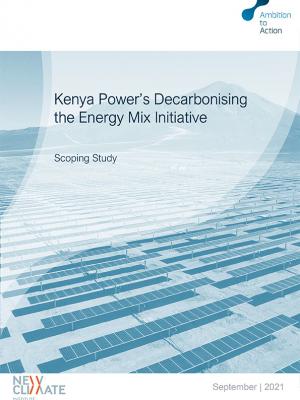 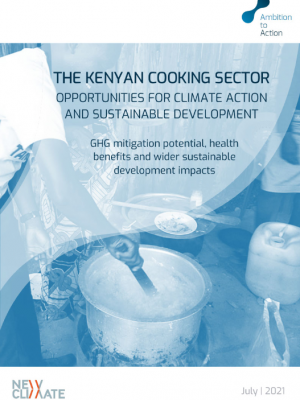 The objective of this report is to synthesize the analysis and results from analytical and capacity support activities undertaken as... 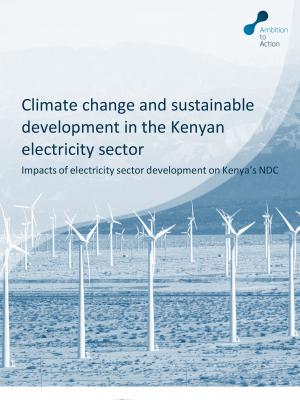 This report synthesises available analyses on the role and potential of mini-grids in Kenya and explores how this technology can help... 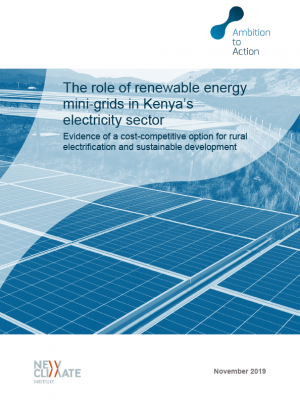 The study analyses the country background, emissions trends, ongoing activities and barriers relating to the implementation of the... 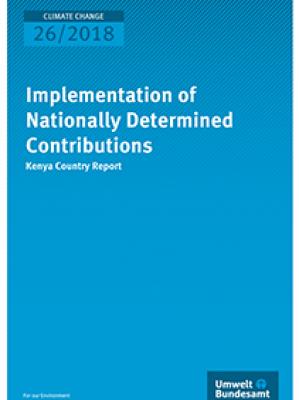