Impacts of the Clean Development Mechanism

This focus study presents evidence on the impacts of the Clean Development Mechanism (CDM). This includes a quantitative assessment of the mitigation impact of the CDM that occurs as a side effect of the current depressed market conditions. This mitigation impact is unintended and undesirable, possible because under the current market conditions mitigation activities originally designed for generating emission reduction credits under the CDM continue to operate their mitigation equipment but discontinue issuing offsets. Using the data generated by the extensive survey of 1,310 CDM projects in the parent study (addressed as the ‘Status Report’ in text), this study mainly attempts to quantify the current unintended global mitigation impact of the CDM and attempts to quantify effects for the actual supply and demand balance of offset units on the international market under current conditions.

Combining the results of the analysis leads to the conclusion that the annual net mitigation impact of the CDM in 2014 is in the order of 480 MtCO2e and thus might have reduced global emissions by approximately 1% in 2014. Although unintended and undesirable, this effect is enormous given that the mechanism is designed to be a ‘zero sum’ instrument. The survey responses moreover allowed to draw conclusions on the price elasticity projected for potential market recovery scenarios. The study results show that a EUR 2 market recovery will only lead to a modest increase in supply and thus could be initiated by a modest increase in demand. In contrast, a CER price of EUR 5 would already reduce the unintended net mitigation impact by more than 50% as compared to the EUR 2 scenario but requires substantial increases in demand, or non-market interventions. A CER price in excess of EUR 5 could restore market confidence by significantly reducing the gap between the volume of emission reductions taking place and the feasible volume of credit issuance.

These findings were presented alongside other similar studies at COP21.

The Clean Development Mechanism (CDM) has become one of the world’s most important carbon market instruments, diffusing carbon price... 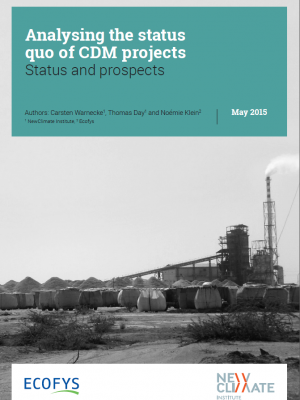